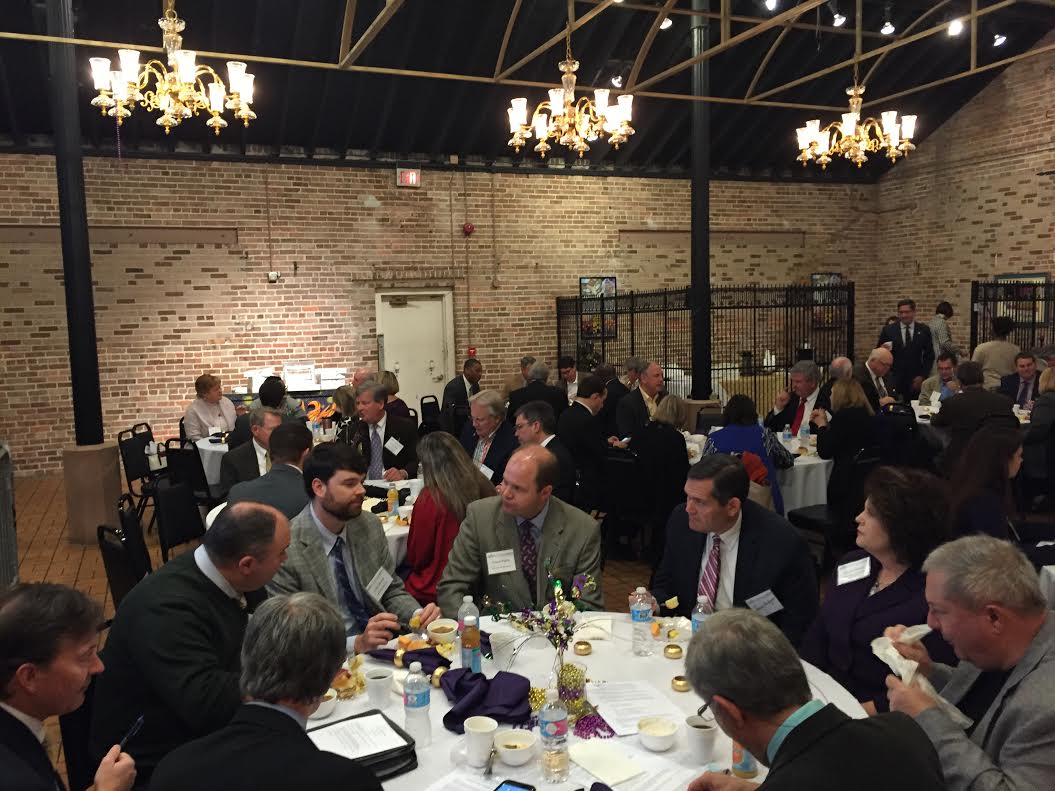 On January 20th, 2016, Coastal Alabama Partnership (CAP) hosted its 2nd Annual Meeting at the Mobile Carnival Museum. The event was attended by over 100 stakeholders and supporters of the organization that have become partners in CAP’s journey to success, including local elected officials from Mobile and Baldwin counties. The meeting focused on celebrating CAP’s accomplishments in 2015 and looking forward to an equally impactful 2016.

Sheila Hodges, Chairman of CAP’s Board of Directors, welcomed the guests to the breakfast meeting and briefly summarized the mission and history of CAP. CAP is a collaborative organization, born from the Coastal Recovery Commission (CRC) and a challenge by Governor Bob Riley to work as a region. CAP’s goal is to continue the mission of working for coastal Alabama, forging partnerships and leading the way for a better quality of life. Ms. Hodges focused on how incredibly the region has come together over the past few years since the CRC and praised CAP for its continuing efforts, especially in leadership in the community.

Stacy Wellborn, CAP Communications Coordinator, continued the conversation about leadership and announced the official launch of the Coastal Civic Master’s (CCM) Program in 2016. Developed from a call to action from the CRC report, this program is designed to build a regional leadership coalition to promote the needs of Coastal Alabama, including Mobile and Baldwin counties, provide leadership development for area leaders, and build community awareness for leaders of Coastal Alabama issues. Ideal participants are up and coming leaders in business and community leadership, who are interested in a possible future civic and/or elected leadership role. Ms. Wellborn stressed the importance of “getting our young leaders ready for elected involvement.” She also made clear that the program does not replace any of the leadership programs already in place but fits between the county level and state level. Those interested in nominating someone or applying for the program can visit http://coastalalabama.org/leadership/coastal-civic-masters-program/ or contact Ms. Wellborn at stacy@72.249.150.161 for more details. Applications are due February 5th, 2016.

Instead of a final project, CCM Program participants will work together to develop recommendations that may be used during CAP’s Regional Strategic Planning process. Robert Pittman, Janus Institute, spoke further on the planning process at the breakfast. In partnership with Goodwyn, Mills and Cawood, his team is focused on developing the first phase of the plan, the economic development component. The component outcomes will include a clear understanding of economic trends and significance of Mobile and Baldwin economies and identifying opportunities for the future of those economies. Based on preliminary research, Mr. Pittman shared that Mobile and Baldwin counties “have a strong economy now and your two counties work together well.” He also mentioned that “we see tremendous opportunities to promote coastal Alabama as a whole as a great market.” Preliminary findings of the economic development component will be presented at the CAP Legislative Reception in Montgomery on March 8th, 2016. The complete phase is expected to be complete by fall 2016.

Wiley Blankenship, CEO and President of CAP, continued the meeting by highlighting additional CAP accomplishments in 2015. These include:

Looking at 2016, CAP is excited to continue to partner with organizations and leaders regionally to pursue a better future for coastal Alabama. Mr. Blankenship concluded the meeting by highlighting a few items to look forward to in 2016. These include beginning the CCM Program with its inaugural class, continuing the Regional Strategic Planning process and hosting the 2nd CAP Legislative Trip and Reception in Montgomery on March 8th, 2016. CAP is thankful for each stakeholder’s support of our efforts. Thank you to everyone who was able to celebrate with us and we are looking forward to another great year working together with you!