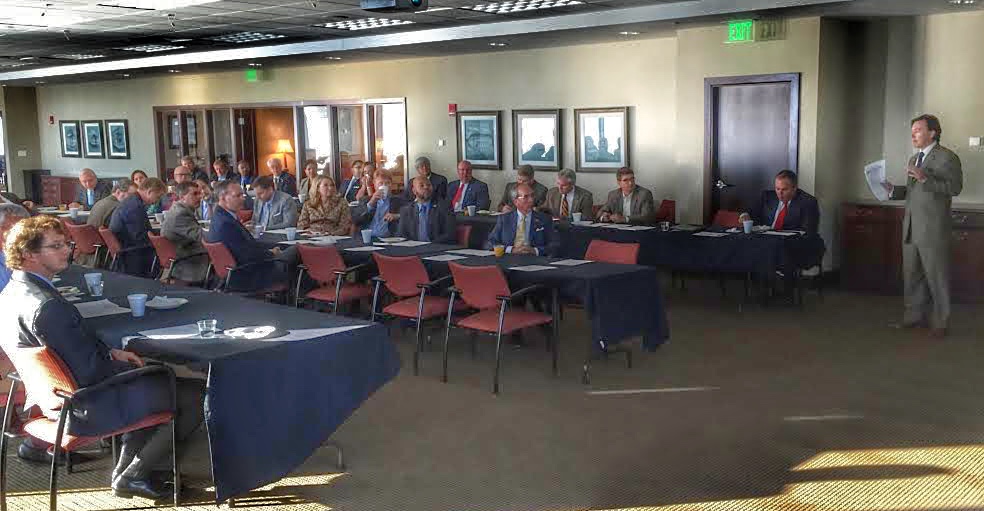 On Wednesday, October 22, 2014, twenty-four mayors, county commissioners, and legislators from Mobile and Baldwin counties attended a debriefing hosted by Coastal Alabama Partnership (CAP) on the Washington D.C. trip. The trip, held September 15– 17, 2014, consisted of twenty-six elected officials and local business leaders traveling to our nation’s capital with one focus, building support for the I-10 bridge project. At the debriefing breakfast, CAP and those who attended the D.C. trip provided details about their experience on Capitol Hill.

Britton Bonner, Partner at Adams and Reese, and Wiley Blankenship, President and CEO of CAP, reviewed the agenda from the trip and highlighted key takeaways from each meeting. Over the two days in D.C., the group met with U.S. Senators and Congressmen along the I-10 corridor, the Federal Highway Administration (FHWA), the Department of Transportation (DOT), the Office of Management and Budget (OMB), and the Office of the Vice President. During these meetings, the group garnered support for the I-10 Bridge project from those in Washington. Each federal elected official recognized the importance of this project on a regional and national level and many, including Majority Whip Steve Scalise from Louisiana, offered to assist Congressman Bradley Byrne in moving this project forward.

In addition to building support regionally for the project, the FHWA and DOT provided key information about possible funding solutions. These solutions include Innovative Program Delivery and listing the I-10 Bridge project on the Projects of National and Regional Significance (PNRS). The Office of Innovative Program Delivery provides tools and expertise to help communities brainstorm and implement innovative plans to finance transportation infrastructure projects. The FHWA has offered to conduct a two-day workshop in coastal Alabama exploring innovative ways to fund the I-10 Bridge. South Alabama Regional Planning Commission and CAP will be sponsoring this workshop and it will be held in January 2015.

The PNRS is a list of projects from across the nation focusing on improving the movement of people and goods through the U.S. Prior to the trip to Washington D.C., The Alabama Department of Transportation (ALDOT) had not filled out the survey to be considered for the list of projects and the deadline to submit projects was July 2014. However, due to the group’s effort in D.C., the FHWA extended the deadline to allow ALDOT to submit the I-10 Bridge project for the PNRS. ALDOT is working on submitting it by November 17th. Though the PNRS program is currently unfunded, it is critical to include the I-10 Bridge on the list to raise awareness of its importance nationally.

During the debriefing, many of those who traveled to D.C. spoke of the trip’s success. Mayor Sandy Stimpson with the City of Mobile said “it was very rewarding. Not only from what we learned in D.C. but also the opportunity as mayors and county commissioners, for us to all get on the same page and realize the importance of this project.” Mayor Michael McMillan with the City of Spanish Fort said that “The unity of the region was very impressive at every meeting we had in Washington. They recognized that this has become a regional issue and the togetherness of our group really pushed that forward and made a big impact on them.” Mayor Brett Dungan with the City of Bayou La Batre added that “When we went to Washington D.C., it really spoke volumes and did not go unnoticed.”

Along with those that attended the D.C. trip, members of the Alabama Delegation voiced support for the bridge project. Alabama state Senator Virginia Figures said “It’s very important because of the traffic back up. I think it is very important to this whole region across the Gulf.” She was also impressed with the organized effort to Washington D.C., saying “I think it is a great thing that all of the different governments in the various cities and counties are coming together to do this.” Alabama state Senator Trip Pittman echoed his support for the project, saying that he “had already talked to (Director John Cooper) earlier about some of the things we need to do in order to try to get more resources for ALDOT and obviously trying to link those additional resources to this project would be important.”

John Cooper, Director of ALDOT, and Matthew Ericksen, Assistant Regional Engineer, attended the breakfast on Wednesday morning. At the end of the debriefing, Mr. Cooper reminded those in attendance that we are “talking big money and there is no magical pot of money. Someone will have to pay for this.” He briefly reviewed the process that must be adhered to before construction of the bridge can begin and emphasized that “this is a marathon, not a sprint.” With that in mind, Mr. Cooper praised the group for their efforts thus far, saying “what you folks have done is amazing.” He encouraged the group to “keep at it” because “we’re going to build this bridge.”

For more information about the I-10 Bridge effort, please check out the “Latest News” section of www.buildthei10bridge.com.