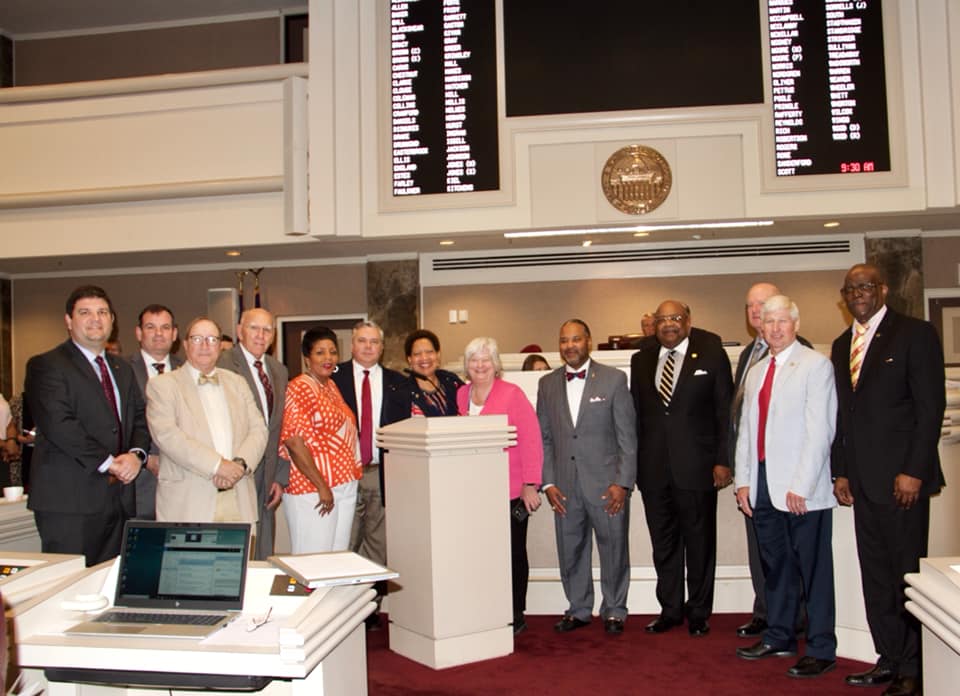 The Alabama Legislature adjourned the 2019 annual Regular Session on Friday, May 31 on the 28th Day of the Session. This included a separate Special session in March, to address infrastructure in the state. Below are a few issues addressed during this session that directly dealt with topics included in the Coastal Alabama Partnership Legislative agenda.

CAP believes we should be investing in the state’s transportation and infrastructure needs. The

Alabama Department of Transportation has had to devote an increasingly large share of its budget to preserving the existing road system, with a shrinking pool of money available for new projects to address congestion, transportation improvements and economic development.

The Rebuild Alabama Act which was passed and signed in to law in March does not solve all of Alabama’s infrastructure needs it does address a very critical initiative which creates a long-term funding solution to address the state’s infrastructure needs in our state’s roads, bridges and port. This legislation was a unique opportunity to address two key issues specifically, the investment in the Alabama Port Authority and fixing our transportation crisis. By 2021, this law will expect to generate about $320 million a year that will go toward improving infrastructure. More importantly for Coastal Alabama, this law included nearly $12 million a year to match Federal Funds for the Mobile Channel expansion.

The Alabama State Port Authority is one of the largest economic engines for the state, with a $22.4 billion economic impact. According to an economic impact study from the University of Alabama’s Center for Business and Economic Research, the port is responsible for 134,608 direct and indirect jobs in the state with a direct and indirect tax impact of $486.9 million. Expansion of the channel is vital in maintaining the port’s growth

Removal of the Transient Occupancy Tax

During the regular session, there was multiple attempts to remove or reduce the Transient occupancy tax (lodging tax) in the State of Alabama. These proposals Senate Bill 19 and Senate Bill 308, had the potential to be very harmful to our region for proposed to remove and reduce   Lodging Tax from RV parks, marine slips and tent camping. Coastal Alabama attracts millions of visitors each year, many of which use our many RV parks and waterways.

Coastal Alabama Partnership’s Tourism initiative mission is to work with the region’s tourism entities to jointly identify strategies that highlight the destination’s potential and maximum marketing of the region’s amenities, unique attributes and natural features. In Coastal Alabama, rough estimates on scraping this tax could have put lost revenue somewhere over $2 Million dollars a year. Specifically, impacting many coastal counties and municipalities that rely heavily on tourism taking a significant amount of revenue away.

We have numerous RV parks and marine slips with direct access to many of our core ecotourism assets. The removal and reducing this tax presented negative impacts to the return on investment to our local governments and municipalities.

This tax unfamiliar to many still has a major impact to our communities. The Town of Dauphin Island according to Mayor Jeff Collier collects $45,000 in lodging revenues. The City of Foley, according to its Mayor John Koniar collects $101,000 in revenue last year. However, Foley has one new RV Park about to be complete construction and two others scheduled to finish soon which would increase that revenue upwards of $250, 000 a year. Gulf Shores and Orange Beach collect $750,000 in revenue from RV parks alone.

We worked with our Tourism partners to defeat the removal of the tax and fought to have the sunset date decreased. Ultimately, the legislation passed only reducing the sunset date from 180 days to 90 days. Which was far less of an impact on our communities and tourism officials.

CAP works with regional Gulf Coast partners to address issues and challenges to affordable wind insurance coverage for all citizens and businesses of Coastal Alabama. CAP supports mitigation strategies for the Coastal Alabama region through specifically advocating for Federal and State funding for “Strengthen Alabama Homes Programs,” a mitigation grant program established in 2012.

Three bills passed in both Houses addressing improvements in Fortified Construction Standards and supported the “Strengthen Alabama Homes Program” all part of the CAP legislative Agenda.

House Bill 283 by Representative Chip Brown (Mobile) would require insurance companies writing homeowners insurance policies to offer an endorsement that upgrades a home to a fortified standard adopted when the insured incurs roof damage covered by the policy that will require a roof to be replaced.

House Bill 363 by Representative Chip Brown (Mobile) would require the Strengthen Alabama Homes Program to maintain as confidential all documents and information submitted in support of grant applications.

House Bill 363 by Representative Chip Brown (Mobile) would authorize the Commissioner of Insurance to create educational and informational programs and presentations for consumers regarding insurance and other matters regulated by the department.This bill would also add hurricanes and nonhurricane wind and hail to the list of perils for which information is to be provided by insurers to the department. Under the previous law, the Property Insurance Clarity Act requires insurers authorized to transact homeowners insurance in this state, to annually submit certain information to the Department of Insurance regarding incurred losses, policies in force, and earned premium for the prior calendar year.