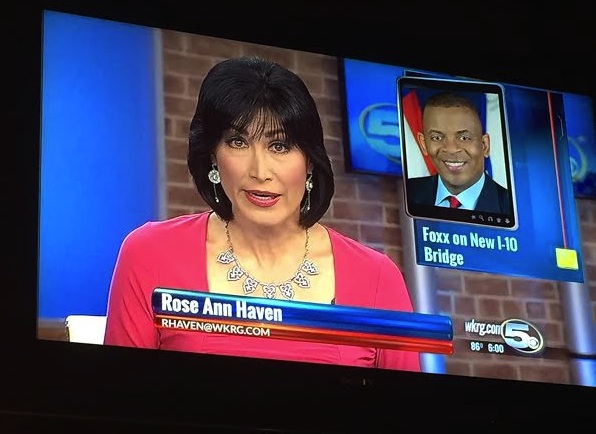 Secretary Foxx briefed local leadership on the current challenges of our nation’s infrastructure. The two main problems we have as a nation are 1) aging infrastructure in the Northeast and Midwest (including tunnels that are over 105 years old) and 2) a growing population that is moving to the Gulf Coast. These problems are further crippling due to the shortfall in funding of the highway trust fund by $15 billion and the lack of a long range federal highway bill. “Uncertainty is choking our country” said Foxx.

In the face of these challenges, Secretary Foxx recognized that Mobile does not have the time to wait for a bill to pass to build the I-10 Bridge project. With the George Wallace Tunnel above daily capacity by nearly 20,000 vehicles (and growing), it is crucial that the project move forward as quickly as possible. The primary option Secretary Foxx proposed to help fund the I-10 Bridge is creative financing. This includes exploring the Transportation Infrastructure Finance and Innovation Act (TIFIA) program which is under the Build America Investment Initiative. This program allows the Federal Highway Administration (FHWA) to loan a substantial amount to help fund large infrastructure projects and is paid back over a 35 year period. The FHWA is also working to streamline the permitting process to help get projects done faster without compromising structural integrity or the environment. Secretary Foxx assured local leadership that the FHWA will use every tool they have available to help move the I-10 Bridge project forward. He stated that “bill or no bill, I will be fighting for you to get this project done.”

In his closing remarks, Secretary Foxx reiterated the FHWA’s goal to increase connectivity and opportunities through this project and others throughout the nation. He acknowledged that this is not just a Mobile Issue but a regional issue and was encouraged by the community consensus around the I-10 Bridge project. According to the Secretary, having the elected officials work together is a huge step forward. This consensus was highlighted during Coastal Alabama Partnership’s (CAP) elected officials’ trip to Washington D.C. last fall which partly prompted Congressman Byrne’s request for Secretary Foxx’s visit. Since that trip, CAP has been working closely with our elected leadership, Build the I-10 Bridge Coalition and Congressman Byrne’s office to continue to speak with one voice in favor of the I-10 Bridge project.

CAP would like to thank Secretary Foxx for committing FHWA’s focus to figuring out ways to move the I-10 Bridge project forward and to Congressman Byrne for his continued support of this project, among many others in Coastal Alabama, on Capitol Hill. In addition, we would like to thank our local elected officials whose collaboration and dedication are truly the driving force behind the project’s progress to date.

Echoing Secretary Foxx’s statement “You (Coastal Alabama) have your act together, let’s not wait, let’s get going.”