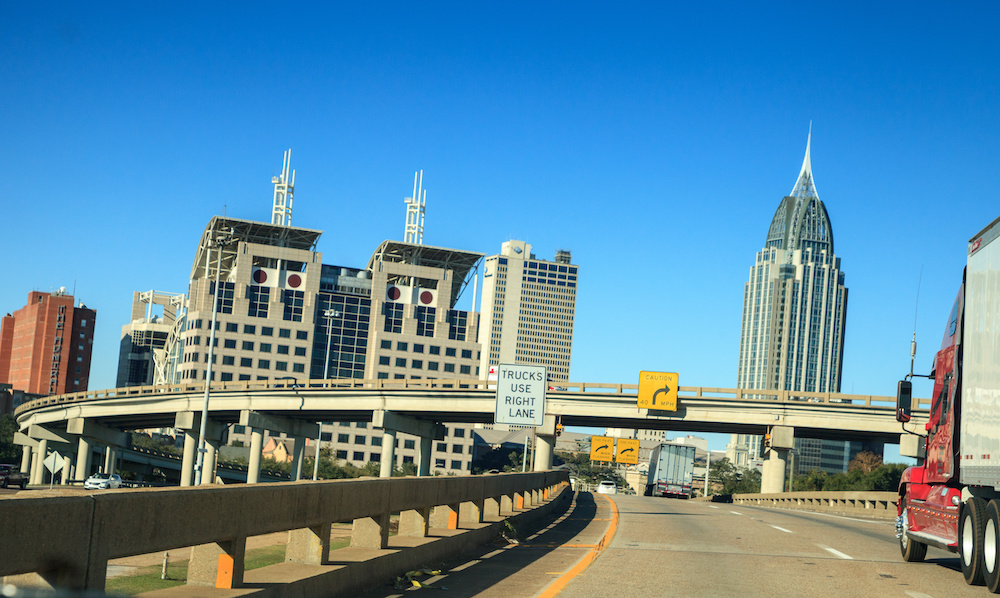 As Alabama’s Coastal region becomes a key logistical hub for the nation that includes a seaport, interstates, five major railroads and a new regional airport, the area is primed for significantly more economic growth and job creation.

Nearly 86 percent of those surveyed rate traffic congestion on the Bayway and through the Wallace Tunnel as bad or very bad during peak travel times.

Relieving traffic congestion and speeding up the flow of commerce through the area are the key objectives of a concept unveiled last week by local leaders to construct a truck-only bridge over the Mobile River and add lanes to the Bayway.

Poll respondents supported this new concept by a two to one margin, with 51 support saying they support it while less than 26 percent voiced opposition.  24 percent said they were unsure.

Removing large trucks from the Wallace Tunnel – which is also part of the new concept – would significantly improve or somewhat improve traffic flow, 77 percent of survey respondents said.

The new concept would also separate cars and large trucks into designated lanes crossing the Bayway so they do not travel in the same lanes.  64 percent of poll respondents said doing so would improve highway safety and traffic congestion, 15 percent responded it would not improve highway safety and traffic congestion, and 21 percent said they are unsure.

The truck bridge and Bayway restriping concept would include a fee of no more than $15 only on large trucks over 46 feet in length to use the truck bridge, which is less than half of the fee considered under a previous Mobile River bridge plan.  There would be no tolls or fees on existing routes, or on cars or other vehicles less than 46 feet in length.  Large trucks would use the new truck-only bridge and would no longer use the Wallace Tunnel.

“With so many positive economic changes taking place, the sky should be the limit for Coastal Alabama.  One key issue that could hold us back is the serious traffic congestion that impedes the smooth flow of commerce through our area.  This is a significant problem for our workers and our businesses, especially the trucking industry,” said Wiley Blankenship, the President and CEO of Coastal Alabama Partnership.  “The concept unveiled by local leaders for a truck bridge and expanded Bayway is a creative idea to address the serious concerns people are expressing over traffic congestion and the threat it poses to our economic future.”

Coastal Alabama Partnership (CAP) is a not-for-profit organization focused on providing a platform for regional leaders to convene, collaborate, build consensus, and advocate for Coastal Alabama’s top priorities.  CAP supports funding for infrastructure and transportation projects that will facilitate economic competitiveness, environmental sustainability, and improve the overall quality of life for all citizens and businesses in Coastal Alabama.