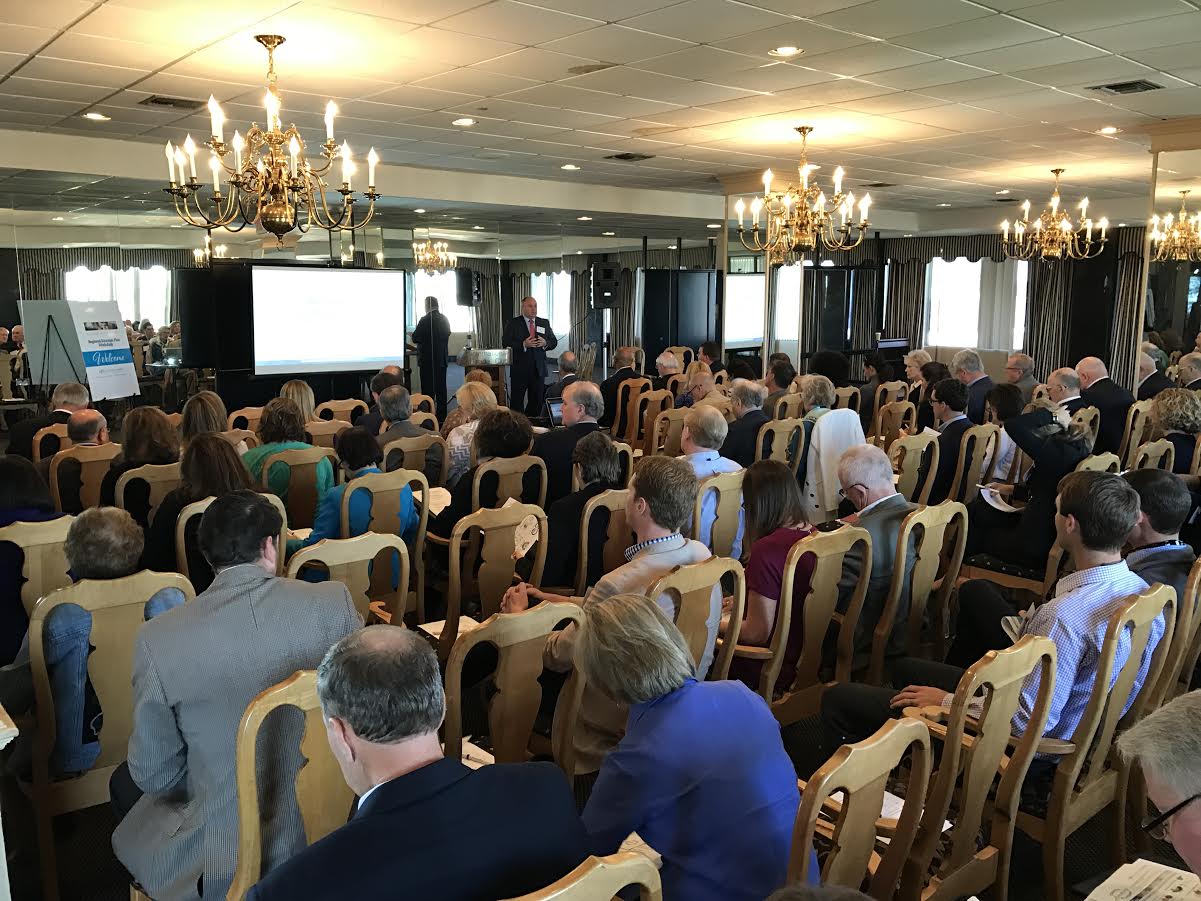 Mayor Stimpson and Mayor Craft began the meeting with comments about the importance of leadership coming together to plan together. “The greatest opportunity that we have exists because of the collaboration that we have continuing to work together,” said Mayor Stimpson. He referenced the success of the 2014 CAP Legislative Fly-In to Washington D.C., where 16 elected officials from Mobile and Baldwin counties journeyed to the nation’s Capital to advocate of the I-10 Bridge Project.

“When they saw as many elected officials present from two counties all singing off the same sheet of music, they said they’d never really seen that before and that made a huge impact” said Mayor Stimpson, referring to the reaction of federal leadership to the fly-in.

Mayor Craft agreed with the Mayor of Mobile’s statements, adding that “the opportunities that we have working together is so much greater than if we don’t cooperate with each other.” He went on to talk about a recent opportunity to effectively impact the infrastructure needs of our region nationally. Mayor Craft emphasized the importance of being prepared for such opportunities because “you very seldom get a big opportunity to do anything…If you aren’t ready when it shows up, its gone and you got to wait on the next one.”

Wiley Blankenship, CEO and President of CAP, continued the conversation of regionalism by providing a brief summary of initial findings from Part 1 of the Regional Strategic Plan. Part 1 assesses the significance of the Coastal Alabama region and develops an economic baseline, as well as identifies opportunities to diversify and strengthen the Coastal Alabama region. “One thing of note, we could not find a baseline. This is to create that,” said Mr. Blankenship.

Mr. Blankenship explained that “there were over 30 initial people interviewed that gave input (to Part 1) in which you all will now take and look deeper into. They identified some things that they felt needed to be addressed regionally that were not being addressed.” A few of the initial findings of Part 1 include the need to develop a regional brand to effectively tell the story of Coastal Alabama, to invest in a plan to support entrepreneurial efforts throughout the region and to better coordinate transportation planning between the two coastal counties to improve infrastructure. “We’ve got some challenges which show we need to plan effectively” said Mr. Blankenship. The completed Part 1 Report will be unveiled at the Regional Strategic Plan Kick-Off Meeting on Monday, May 22nd, 2017.

Following Mr. Blankenship’s presentation, the focus of the meeting shifted to next steps of Part 2 of the planning process. Larry Watts, Director of Community Planning at Goodwyn, Mills and Cawood (GMC), introduced the Part 2 planning team, consisting of CAP, GMC, planning NEXT and Kimberly-Horn. “We think this is a great opportunity for this region. So much good stuff is going on” said Mr. Watts. Brandon Bias with GMC gave an overview of how the committee can be involved in Part 2 of the planning process. He invited the committee members to participate in a week-long planning workshop in May 2017. The workshop will include a Kick-off meeting on May 22nd, nine focus groups sessions during the week and a final presentation on May 25th, 2017. The team will also host a few sessions prior to the May 22nd Kick-off meeting in order to cover a larger range of topics. The topics that will be discussed during the workshop sessions will be opportunities and challenges related to resilience, environment, education, workforce, economic development, innovation, tourism, infrastructure, transportation, seafood, social services, public health and government structure. Following the workshop, the planning team will produce a framework for growth and development in the Coastal Alabama region with specific principles, goals and objectives.

The meeting concluded with an interactive feedback section with the committee. Mr. Bias asked the attendees to write down on a notecard the answers to two questions: 1) What do you think our greatest opportunities are to be even better in the future? and 2) What do you think our greatest challenges are to realizing our potential? Attendees were encouraged to share their thoughts aloud with the group. Opportunities vocalized at the meeting included the development of a high-speed ferry across Mobile Bay to connect the Eastern Shore to Downtown Mobile, a collaborative effort connecting tourism regionally to drive visitors to attractions on both sides of the bay (including the GulfQuest Maritime Museum), capitalizing on history in our region by developing a history trail, a greater connection of the arts in Mobile and Baldwin counties and the development of technology and aerospace in the region. Some of the challenges shared by the participants included unplanned growth, lack of skilled workforce and affordable housing, lack of understanding among the citizens of Baldwin and Mobiles about the critical nature of regionalism, inadequate funding for regional opportunities and aging infrastructure. All answers provided both verbally and on paper have been recorded and will be used to inform the workshop conversations this May.

Thank you to those that participated in the April 7th meeting and all who are serving on the Advisory committee. Your input and leadership are critical to ensuring that this planning process is success. If you have any questions about the planning process or would like to know how you can be involved, please contact Kristen O’Keefe at kristen@coastalalabama.org.